This book was lent to me by a friend who also suffers from depression and had found it helpful. I was so impressed by the introduction that I almost sat down to blog about it there and then.
Dr Aaron Kheriaty, an experienced psychiatrist, with some help from Fr John Cihak, a theologian, has written and excellent, extremely readable book about depression. It is the best thing about depression I have ever read, and it is the only thing about depression I have ever read which I thought I could give someone else to read and it would help them understand my condition.
The approach to mental illness, and specifically depression, is grounded in Catholic anthrolopology and a truly integral vision of the human person: body, soul and spirit. It explains what depression is not and how, given the fact that it is an illness which pervades all aspects of the person, the treatment must be likewise holistic. Brief descriptions of treatment options are covered but the most interesting and best part of the book is that it is so spiritual. As I've given my copy back to the person who lent it to me I can't give a more detailed explanation, but I plan to buy one for myself.
As depression is now the 3rd or 4th leading cause of illness worldwide, you will probably find reason at some point in your life to read this book. In the mean time:
Posted by Recusant at 17:03 No comments:

In the cafe formerly known as La Terasse and making most of free wifi. Typing with one finger on iPod hence Bridget Jones style of post.
No. Of cappuccinos today 1. With cream. V bad.
Lourdes is v quiet. Fewer pilgrims and volunteers.
Train services disrupted (prob accounts for lack of Italians).
Sanctuaries open and mostly normal.
Underground basilica still closed - no international mass and Eucharistic procession is a non-Procession which takes place near the podium.
St Bernadette's Church open as normal.
Confessions as normal.
Grotto open, some damage to glass around the spring.
Baths open but water change is slower than usual due to damaged filtration system.
Main bridge in sanctuary is damaged but open with temporary railings. Farthest bridge (past the baths) is closed.
Abri St Michel (v important place which feeds volunteers and scouts) v badly damaged and still closed. Restaurant temporarily rehoused in St Frai.
Some hotels still closed - mud reported. Many business owners v demolarised.
All shops appear open.
Best orange juice to be found in the Acceuil Maie St Frai where a glass of the freshly pressed stuff only 2E20. Vg.

This is the Recusant reporting from Lourdes. And now, back to the studio.
Posted by Recusant at 08:34 2 comments: 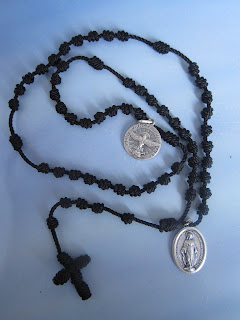 My silent Confirmation Group are to be confirmed this Sunday, and I have finally finished their gift: I have made each of them a rosary.

I learned to make these rosaries when I lived in Peru and it has sort of become my hobby, although getting the right kind of thread at a non-prohibitive price seems to be difficult in this country (probably as there aren't many people making fishing nets by hand) and nowadays I tend to make them only when I have someone specific in mind, rather than on the off chance. String is not yet banned on planes, and a piece of string easily fits in your handbag (although does have an unfortunately habit of tying all your possessions together, which then spill over the floor when you pull it out) so it is a good activity for journeys and waiting rooms.
I like to put Marian medals on rosaries and, as these are Confirmation gifts, I thought it would be a good idea to give the Holy Spirit a look-in as well. As I live in the Catholic wilderness, in the end I commissioned a friend in Manchester to get me some medals from the shop at Salford Cathedral. They have had these rather nice ones of the Holy Spirit with the Heart of Mary before, but whenever I have been in there specifically looking for them I have been disappointed. On my own rosary I have medals of Our Lady of Walsingham, Pope Benedict XVI, Blessed John Henry Newman, St Bernadette and St John Bosco. In this way when I pray the rosary I have the experience that I am praying with friends (and I also remember to say a decade for the Holy Father).
These knotted rosaries are rather good for using when unable to sleep (or when you wake up in the night worrying about whatever mad dream you have just had) as if you do drift off while praying, you don't then wake up when you lie on top of them or they fall of the bed with a resounding crash. Theoretically they are also machine washable and won't leach all over your sheets if you accidently bundle them up when stripping the bed/leave them in your pockets. I haven't actually tried this.
Also featured in the photo is the extremely PC hymnbook we use in our parish (borrowed for legitimate purposes), which I have finally found a good use for as background.
Posted by Recusant at 14:25 No comments:

Recusant
United Kingdom
A thirtysomething Catholic woman, school and university left me with faith hampered by a complete lack of formation and very liberal ideas. Fortunately, in my 20s, I met some people who actually knew what they were talking about. I realised that (1) my very laid back approach to the truth didn't really make sense and (2) I was a rather schizophrenic Catholic, with a lack of cohesion between faith and life. Following lengthy discernment, I am now back in the world of work as a hospital pharmacist, trying to maintain that cohesion. I am passionate about pharmacy and the only thing that makes me crosser than bad prescribing is bad hymns (but until you've heard the Kyrie sung to the tune of Hey, Jude you ain't heard nothing).